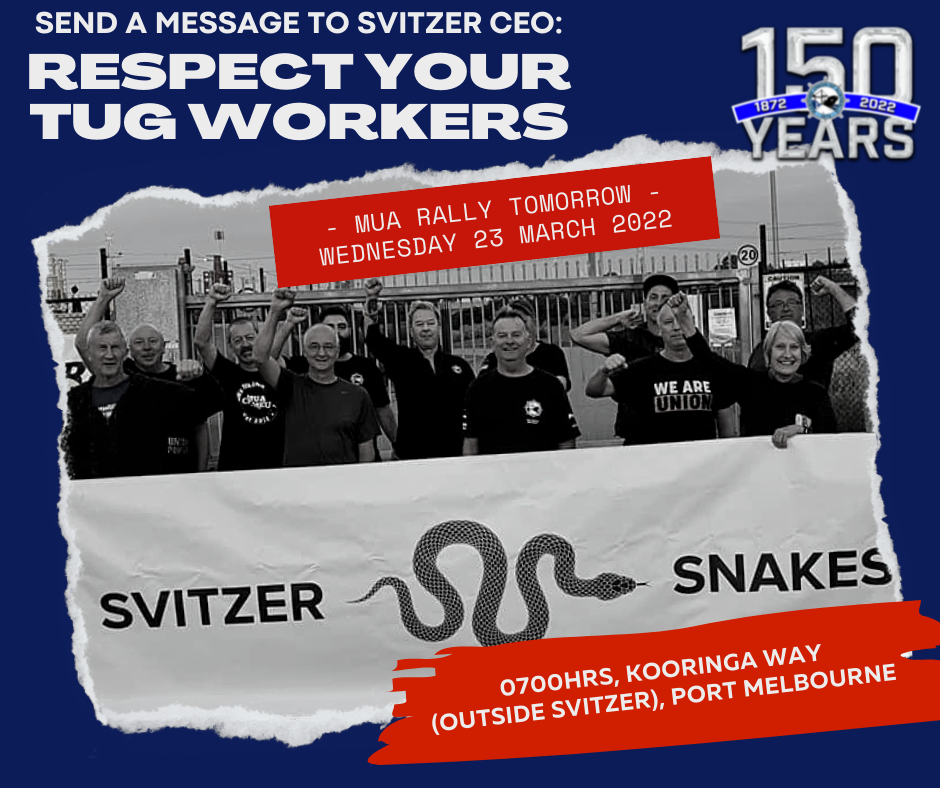 The global head of tug and towage giant Svitzer, Kasper Friis Nilaus, is visiting middle managers at Port Melbourne this week, however, despite his company’s apparent urgency in applying to the Fair Work Commission to terminate the employment of its entire Australian crew, Mr Nilhaus has doggedly refused to meet with workers to negotiate a fair outcome for over 1000 Australian tugboat crew.

Svitzer has been engaged in a protracted industrial dispute entirely of its own making, risking the productivity and efficiency of our ports at a time when community anxieties about Australia’s precarious position within global supply chains are already running high.

The Maritime Union of Australia’s Victorian Branch will rally outside the tug company’s offices on Wednesday morning (March 23), calling on the CEO to step in to avoid further escalations of the ongoing industrial dispute being led by Svitzer management.

“In a cynical attempt to leverage community anxiety around maritime logistics during COVID, this company has systematically manipulated the industrial relations framework to catalyse a dispute which only they seem to want,” said the MUA’s Victorian Branch Deputy Secretary, David Ball.

“The company wants to rip up its employment agreements with its entire crew, which would have catastrophic consequences for 24hr rosters, weekend work and port productivity,” he added.

The company’s application to the Fair Work Commission seeks the termination of the current Enterprise Bargaining Agreement, and if successful would push all of Svitzer’s crew on to the basic Industrial Award. This would essentially push all tugboat workers back to a standard roster, with no provisions for overtime or round-the-clock towage activity.

“The greatest risk to Australian ports and supply chains today is employer-militancy of the kind being spearheaded by Svitzer. Local management of this multinational tug company must not be allowed to interfere in the smooth running of Australia’s ports just to improve the bottom line of Svitzer or its parent company, A.P. Møller – Mærsk”, Mr Ball said.

“The conduct of Svitzer’s local management flies in the face of the corporate values supposedly championed by the company’s global leadership and contradicts the values promoted by the Maersk Group,” Mr Ball said. “Workers must have the opportunity to bargain collectively with their employer, in good faith, and be treated with respect during that process, but the local managers of Svitzer are determined to take us down the path of termination,” he added.

The rally outside Svitzer’s offices at Port Melbourne will call for Svitzer CEO Kasper Nilaus to abandon his plans for a river cruise with local management and instead use this visit to meet with Australian tugboat workers and agree on a nationwide employment agreement that guarantees fair pay, job security and safety at work for all crew.