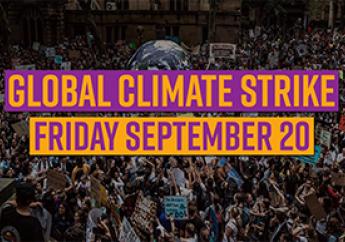 On Friday 20 September 2019, three days before the UN Emergency Climate Summit, school students are inviting everyone to join them for their biggest ever global climate strike. In Adelaide the rally will be at 12pm at Tarntanyangga (Victoria Square).

The MUA have been advised by the Australian Education Union that the Education Department, while not endorsing a walk out, have instructed schools not to take disciplinary action against students. So come along bring your kids and fight with them for their future.

By taking time off school and work together around the world, we’ll show our politicians that people everywhere want climate justice and we’re not going away until we get it. We’ll strike in solidarity for everyone who’s already being hurt by the climate crisis and everyone who will be impacted if we don’t act now: workers, first nations people, young people, mining communities and more.

The MUA’s National Council has voted to endorse the Climate Strike and support is growing across the union movement. The MUA is campaigning for jobs to reduce greenhouse gas emissions. Offshore wind farms could be an excellent source of electricity and jobs for seafarers. If ships were required to plug into electricity in port it would improve air quality at work and in the community, and increase jobs. The government needs to invest in developing new zero-emissions ships using hydrogen. A new hydrogen industry could use renewable energy to power zero-emissions industry and transport, and create manufacturing in Australia that was lost when oil refineries were shut down.

Implementing any programs like this will require a huge struggle. We need to force the government to make the investments we need to drive a transition, funded through taxes on big corporations who are responsible for the current ecological crisis. The school students are leading the way but they don’t have enough power to force the change we need. Workers, unions, and other groups across society will need to join them if we are to prevent catastrophic climate change and ensure a just transition to good union jobs in new low-emissions industries.

At the last School Strike for Climate on 15 March, approximately 150,000 Australian students and 1.4 million students around the world walked out of school to call for action to address the climate crisis. Despite calls from politicians and other authorities for students to protest on the weekend, the students have insisted on the importance of disruptive strike action to get their message across. A whole new generation is learning about taking political action and how strikes can force change. We need to support them.

Unprecedented temperatures across the world this year are driving huge bush fires, water shortages, destructive hurricanes, the melting of ice caps and rising sea levels that are already displacing millions of people each year. Pacific and Torres Strait Island communities are being flooded and many remote Indigenous communities suffered unbearable temperatures and water shortages last summer.

Scientists say that global heating must be kept to 1.5°C below pre-industrial levels in order to avoid catastrophic, irreversible changes in the earth’s climate system. Even at 1.5°C, between 70-90% of reef building coral systems with devastating impacts on marine life across the world. Already, changing climate conditions are contributing to a massive wave of extinctions with dozens of species going extinct every day, unlike anything experienced since the vanishing of dinosaurs nearly 65 million years ago.

Average temperatures have increased by 1°C in the past century. Just using our existing fossil fuel infrastructure until the end of its life locks in a 2°C increase. Emissions in Australia and globally continue to increase, and with current expansion of fossil fuel use the world is on track for a 3.7 to 5°C increase.

What about workers in the fossil fuel industry?

Many MUA members work in offshore oil and gas, and in coal terminals. The union is committed to ensuring that jobs and conditions are maintained for members in any transition to reduce greenhouse gas emissions. We will be best placed to secure strong union agreements in future industries if we are a respected part of a big social movement campaigning for these new jobs and industries. We will be able to secure more government investment and support and better protections for workers if a transition can be properly planned with plenty of notice.

Students have worked with unionists to add a new demand for their 20 September action that calls for a just transition and job creation for workers. The students and other environmental organisations have pledged to support the MUA’s campaign for the development of offshore wind, and released a public solidarity message for DP World wharfies on their main Facebook page.

A good example is New York State. Unions formed a ‘Climate Jobs NY’ campaign and the state government has committed to build 9,000 MW of offshore wind, and to require union agreements and local procurement on those projects.

In Queensland the ETU successfully campaigned for the state government to establish a new public renewable energy generator called CleanCo. Any employees transferring to CleanCo from existing state-owned generators CS Energy or Stanwell will maintain their existing conditions, including no forced redundancies or relocations, and any new CleanCo employees will also be on the same terms and conditions.

In Germany, a special Commission, including the union IG BC, has recommended phasing out coal-fired power and brown coal mines by 2038, but conditional on the creation of quality jobs and clear transition pathways for workers. The plan includes a job guarantee with no forced redundancy for any worker and €40 billion over 20 years for regional development, including infrastructure and rehabilitation of mining areas and plants.

The right to strike

Workers’ industrial power will be critical to delivering a blow to the Morrison Liberal government, and forcing any government to seriously invest in renewable energy. The student walk offs and mass demonstrations are an incredible inspiration. But when workers’ “down tools” and strike, they hit profits and shake the system - this disruption of business as usual is hard to ignore. This is the only way we can force crony capitalists and their friends in parliament to act. This will mean standing up to anti-strike and anti-union laws.

Strike action has never been legal, but since the 1980s more and more penalties have been introduced. The right to strike for “political” actions was specifically outlawed by notorious union-buster John Howard in the 1990s. In the past, strike action played a central role ending the war in Vietnam, including actions by seafarers refusing to take ships of weapons to troops in Vietnam. They used the slogan “Stop Work to Stop the War”. Now we need a movement to “Stop Work to Stop Warming”. Uranium mining was similarly defeated in the 1970s by defiant train drivers refusing to load it. The MUA has a proud history of using industrial action and its social weight in campaigns to stop Apartheid in South Africa, for independence for Indonesia, against the nuclear industry and for many other social justice issues.

Morrison is coming for us yet again, this time with the “Ensuring Integrity Bill” which gives the Fair Work Commission and government extraordinary powers to dismiss union leaders and deregister unions. Student Climate Strikers have also been demonised by the Liberals, with Morrison ordering them to stay in school and the Minister for Education in NSW threatening penalties. The School Strike for Climate movement recently issued a statement condemning the “Ensuring Integrity Bill” and standing in solidarity with unions and our right to take industrial action. A huge demonstration on September 20 can build on this solidarity and deal a strong blow to the Morrison government.

We need to the Right to Strike if we are ever going to win the right to a future for our children and communities.