Discovery of freighter sunk by submarine during WWII 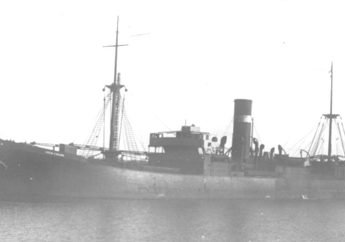 The discovery of the wreck of the BHP owned and operated SS Iron Crown, 77 years after it was sunk by a Japanese submarine attack, is a sobering reminder of the one in eight Australian merchant seafarers who sacrificed their lives during the second world war to maintain vital supplies of goods and materials for the war effort.

The vessel was carrying a cargo of manganese ore, needed for steelmaking, through Bass Strait on June 4, 1942 when it was torpedoed. It sank within 60 seconds, claiming the lives of 38 of the 43 crew.

The Maritime Union of Australia said the discovery of the wreck after 77 years, about 100 kilometres south of Mallacoota, was a sobering reminder of the sacrifice made by so many Australian merchant seafarers during WWII.

“During the war, the sinking of merchant vessels was kept secret for fear of undermining moral, but seafarers and their families were well aware of the risks they were taking each time they set out,” MUA National Secretary Paddy Crumlin said.

“Maintaining supplies of raw materials and other goods were essential to the success of the fight against European fascism and Japanese militarism, and Australian merchant seafarers willingly risked their lives to keep those supply lines open.

“Merchant vessels were prime targets for attacks, and the crew on board the SS Iron Crown would have been well aware of the risk of Japanese submarine attacks as they headed around the Australian coast.

“In total, about 30 merchant vessels were sunk in Australian waters during the war, resulting in a casualty rate among merchant seafarers that was higher than those suffered by any of the armed forces.

“On the eve of Anzac Day, and on behalf of the members of the Maritime Union of Australia, I wish to recognise and pay respect to all those that lost their lives in defence of our country, and particularly those that died plying the coastal and regional trade routes that were so vital to Australia during that time of massive conflict and threat.”

Mr Crumlin said the importance of Australian seafarers in protecting the nation’s security and economy appeared to have been forgotten, with the Federal Government presiding over the decimation of the nation’s remaining fleet.

“Earlier this year, we lost the final two iron ore vessels, ending a coastal trade that had existed for a century,” Mr Crumlin said.
“The seafarers aboard both the MV Mariloula and MV Lowlands Brilliance were at sea when they were informed by email that BHP had axed the vessels and that this would be their final voyage.

“Australia is now almost entirely dependent on foreign flag of convenience vessels, often registered in tax havens and crewed by exploited visa workers on as little as $2 per hour, to carry fuel, resources, and cargoes around our coastline.

“One of the key lessons of WWII was the importance of having skilled, experienced seafarers who could maintain supply lines during times of national and global emergency and conflict. Australian Merchant shipping has always equalled national security.

“Unfortunately, those lessons have been forgotten, with the Morrison Government happy to issue licenses for the use of foreign vessels and crews to BHP. The result is our last local iron boats in coastal waters have now been lost, this time in peaceful trade protected by Australian coastal trading laws.”