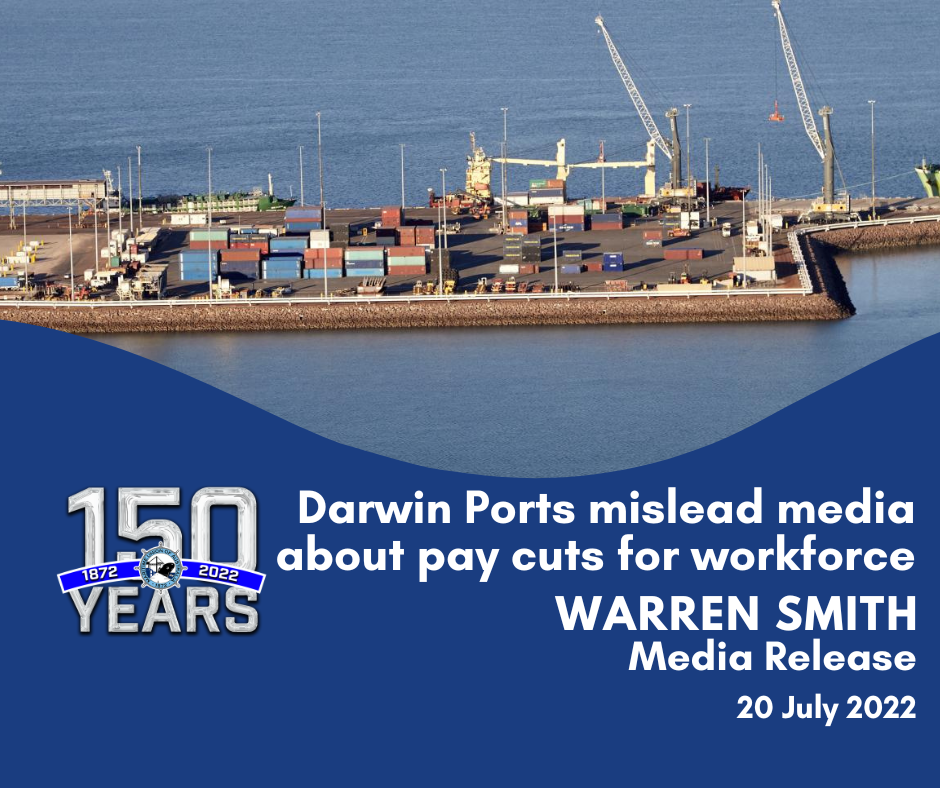 Earlier this week the Maritime Union brought to light the belligerence and self-interest of Darwin Ports in attempting to cut wages with a below-CPI agreement and then to undermine a lawful ballot process being undertaken to gather a democratic mandate for industrial action at the port.

In a public response to the Maritime Union’s concerns, management of Darwin Ports have misled industry media including the Daily Cargo News, with a statement that completely misrepresents the state of the relationship between the company and its workers.

“Sadly, the managers of Darwin Ports have chosen to further undermine any trust or goodwill which remained between themselves and the workers by issuing a statement that is heavy on spin and light on the truth,” said the union’s Deputy National Secretary, Warren Smith.

Mr Smith also took aim at the claim by Darwin Port that the company values its staff and that it was working towards a fair outcome.

“Interestingly, the CEO has not shown his face once during this bargaining period, but he sees fit to make public statements about a process he won’t directly participate in,” said Mr Smith.

“If Mr Dummett and the company truly value their employees, they’ll come back to the negotiating table with a wage offer that takes in to account both the contribution and hard work of their employees as well as the rampant inflation that is diminishing all workers’ purchasing power,” Mr Smith said.

Minutes from the last Reserve Bank of Australia board meeting of 5 July, released yesterday, show that it is businesses passing on price increases from “non labour inputs” that is a key contributor to inflation, and not wage growth. That very revealing admission reinforces the findings of an Australia Institute report published on Monday which demonstrated that soaring corporate profits are the main contributor to out-of-control inflation gripping Australian households.

“Workers must not be asked to pay twice for the rampant profiteering being engaged in by the Australian business sector, both through their household expenses and with an effective wage cut from their employers,” Mr Smith said.

In his email message to MUA members, Mr Smith warned against being swayed by scare tactics and the CEO’s escalation of the conflict to the Fair Work Commission, while encouraging members to vote yes in the industrial action ballot being held until the end of this month.

“Darwin Ports workers kept the port working during COVID, they have worked harder and longer in the face of staff cutbacks and have lifted productivity through multi-skilling, but none of this is being recognised or rewarded by the employer. Darwin Ports’ position through all of this is that their workforce should work harder and longer for less money, and that is something that we simply do not accept,” Mr Smith said.

“This is a pretty shabby way to manage a business or to show your workforce that you ‘value’ them, he added.